So you think you have problems? Maybe you’re schizophrenic, manic depressive or suicidal. Perhaps you just lack the motivation to floss as often as you should. Okay, we’ve all got problems, but the animals in this collection of short stories really have problems. In fact, you could say they have issues. They cope with rejection, addiction, jealousy and egomania to name a few. Some have a persecution complex or are afflicted with existential angst. They are most certainly misunderstood. Each story is a bit of a mystery. The animal’s issue might be obvious, but not what the animal is. You have to guess. Every vignette is only a few pages long so no peeking at the ending. That’s cheating. If you have to cheat at animal stories, well what can I say, maybe you have more issues than these animals do. Just saying. . .

–Introduction to Animals With Issues 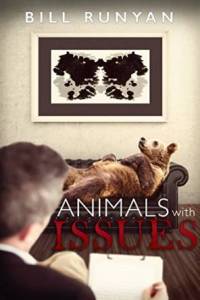 Animals With Issues has become my new favorite short story collection. My first introduction to this mixed up menagerie was the day Bill emailed me a draft of his latest short story. I’m reading about this guy in the middle of some existential crisis and wondering WTF??!  Then he – the guy – decided the only way to resolve his crisis was to take something that didn’t belong to him. Imagine my surprise when the guy got his head bashed in the rocks. It turns out that bears don’t like poachers. Okay, I guess you had to be there. But no you don’t, all you have to do is pick up a copy of the book. It is absolutely hilarious, clever and as snarky as the author is himself. I was so excited when Bill agreed to talk with us today. I don’t have the words to describe this brilliant writer, so I’m going to let him introduce himself:

Bill Runyan (1952 – not dead yet) was born in Boston, MA. He was subsequently moved to Delmar, New York. At the age of eight he was forcibly removed by his parents and transported to Memphis, TN where he has remained more or less ever since. He was educated in the sciences, obtaining a Bachelors in Biology and a Masters in Invertebrate Zoology. Then, of course, he was unemployed, so he became a computer programmer, whose programs often included jokes that were unappreciated. After an early retirement, he took up creative writing. Animals With Issues is his first short story collection and has made him a literary legend in his own mind.

A.S. The reviews and responses to this collection of short stories have been overwhelmingly positive: “fun, snark humor”, “hilarious, neurotic animals on parade”. As the author, how does that make you feel to know that your readers “get” you?

B.R. It makes me feel good. It would make me feel even better if they got their friends and relatives to buy the book. In fact they don’t have to get me at all if they buy the book. Actually, given a forced choice of being appreciated for my unique style and getting obscenely rich as an author, I’d choose the later. I’d like to make so much money that I could squander most of it on hookers and blow. Then I’d go to rehab and write a book about the experience and use that money to start the process all over again.

A.S. Since they don’t know you and for the sake of keeping all of our lives simple, I’m going to add that he is JUST KIDDING folks! Okay Bill, how did you come up with the concept for Animals With Issues? Did you know from the beginning that you were creating a collection? Or did you start with one, the ideas kept coming until one day you noticed that there were enough for a collection?

B.R.Our critique group, the MemphiSlores, was once a part of a larger organization called the Memphis Writers’ Collective. I found them on meetup and the write up for the meeting said they were going to do flash fiction. I didn’t know what flash fiction was so I looked it up and the definition I saw was that it was fiction of less than five hundred words. It was near Thanksgiving, so I wrote my first short story in the collection called “The Trial” about a turkey, but you don’t know that until the end. It was so well received that I decided to keep writing other animal stories in the same vein until I had enough for an anthology. Incidentally, I was the only one to bring a story to that meeting. Bunch of slackers.

A.S. Which of the animal shorts is your favorite? Why?

B.R. I vacillate between “My Trip to Tokyo” and “Art Appreciation.” Both of those stories have narcissist pseudo intellectuals as their central characters. I hate people like that, so I like to make fun of them. I have other stories in there with similar character types, but I think I did these ones particularly well. Sometimes I wonder if I am one and that’s why I can do them so well or am I such a narcissist that I just think I did them well and if I had really done them well my sales would be better and I would be in rehab now instead of writing answers to these interview questions.

B.R. Telepathic communication with aliens whenever possible. If there is too much static I have to do it on my own. For that I use a technique that I read in a book called “Writing the Natural Way.” The author recommended a technique for creative writing where you think of words, draw circles around them and connect them to other circled words. I don’t know what is natural about his, but it seems to work. You can get a story that way. Really you can. For the animals stories I also poked around on YouTube for animal videos. The combination of that and the circles seemed to work.

A.S. Who are your favorite authors? Why?

A.S. Tell us some little known fact about Bill Runyan? Nothing that will get you arrested!

B.R. I used to be an intellectual. As a child I would write letters to the government protesting atmospheric nuclear tests. Then puberty hit and that was the end of that. I didn’t care who got nuked if I could just have carnal knowledge of my English teacher. She never had her way with me, but I like to think she really wanted too, but was just too shy to ask.

A.S. You self-published this collection. Why was that the best choice for you versus the submitting to an established publishing house?

B.R. Most of these stories have links at the end that go to photos and/or videos that reveal what the mystery animal is. It wouldn’t work in a hard copy format. That was one reason. The other reason is that my genre is so unusual that I didn’t have a great deal of confidence that anyone would want to publish it. Mystery animal stories for adults? What kind of genre is that anyway? Who would want to mess with that? I didn’t see it and still don’t.

A.S. Have you gained/gathered any pearls of wisdom you might be willing to share along your road to publication?

B.R. I signed an exclusive deal with Amazon for the first three months. I’m two months in. If I had it to do over again, I wouldn’t have. They don’t do anything for you. At the end of the month I’m going to go with Screwpulp and Smashwords as well.

A.S. What are you working on now?

B.R. I am working on my first novel, tentatively titled “A Man Out of Time.” It is a comedic science fiction, noir detective novel. Once again I have carved out my own unique niche. That sounds creative, but it will make it much harder to publish if I try and go with an established publishing house. I intend to try that at first, but I’m not optimistic. Maybe I will self-publish again and guilt people into buying it. I’m thinking of dressing really shabby and standing on a street corner with a sign: “Famished author needs food. Buy my book or I’ll die of starvation. Do you want that or your conscious?” Then again that sign is probably too wordy, so it probably won’t work. Oh well, I’m having fun writing it. (The book not the sign)

A.S. How can readers get in touch with you?

B.R. First of all, I’m impressed you have readers. I’d love them to get hold of me and tell me how they found your blog in the first place. I’d love it even more if they bought my book which they can find on Amazon. They can get hold of me at runyanBill@gmail.com and tell me how much my work means to them and how it changed their lives for the better and I will write them back and congratulate them on making such an insightful purchase. Your female readers who find themselves suddenly seized by lust should indicate that in the subject line for faster service.

Bill, thank you so much for joining me today. Animals With Issues is now available at Amazon.com. If you have any questions or comments for Bill, feel free to leave them in the comments section below. He’ll be checking in from time to time.

2 thoughts on “Animals With Issues: An interview with author Bill Runyan”